I was familiar with the stages of grief when Ashki died: denial, anger, bargaining, depression, acceptance. It’s funny though, even though I knew denial (or shock) almost always hit first, for those first few days after he died, I thought, Wow, I’m doing okay. I mean, yes, I cried, but I was also pretty functional. I donated some of his things, wrote and sent thank you messages and notes, ran some errands.  Now I see that it was like the sea going out, before the tsunami hit.

For me, the worst of the grief-tsunami were the what ifs. What if I hadn’t decided to do the last transfusion, would he still be alive? What if I had ordered the blood product somewhere else, would he have lived? What if we had weaned him off the immunosuppressants that weren’t working, would he have recovered? What if his other auto-immune condition had been discovered earlier, would that have prevented his IMHA? Was it the last immunosuppressant we tried, did that make him worse? What about the med that I insisted we try, that was supposed to stimulate bone marrow, did that lead to his death? When he bloated, a month before he was diagnosed, and I thought his gums looked pale, I should have insisted that he be checked more thoroughly. And when he wouldn’t eat, I should have found a new vet sooner, then his anemia would have been caught sooner. Maybe it was the flea med, or the heartworm med, or both. Maybe it was when he jumped in the drainage ditch, maybe there was pesticide runoff and it poisoned him, I shouldn’t have let him do that. If I hadn’t moved, would he still be alive? Was it the food I fed him? The treats I gave him? Maybe if, what if, if only… around and around and around my thoughts would swirl, all day and all night.

Even though I knew this was a normal part of grief, that I was bargaining with death and trying to find some way to control the loss and avoid it (in spite of the fact that he was gone, I had seen him die), even though I knew all of that, it was torture. I would talk myself through it, Tamara, this is normal, this is you not wanting to accept that he is gone, that he is dead, this is you wishing it was different, that you could go back and change it.

In spite of knowing that the what ifs were bargaining, and part of the grief process, it felt  like punishment. So then I wondered, is this me wanting to punish myself? Because if I punish myself that means it was my fault and if it was my fault then I could have done something to avoid this and if it could have been avoided then maybe somehow this can all be not true.

I can answer IMHA, transfusion reaction, nonresponse to treatment, but these are how he died, not why he died. And even now, a year later, there is no answer to that question. And I’m not holding my breath that there ever will be.

Some people find solace and answers in maxims or beliefs, and I respect that; however, I’m not one of those people, and I expect that to be respected, as well. We each must find our own way to peace.

So, a year later, I still turn toward grief. It doesn’t come as often, but when it does, I ask it to continue to teach me what it will. And I know that there are some things that I will never know.

As you know, if you read my last post, last week was the anniversary of Ashki’s death. I spent time throughout the week looking at pictures of him, watching videos, thinking about him, thinking about that week. It wasn’t just the date, it was the week —  he had his last transfusion Thursday, and died Friday.

One of the ways I’ve heard grief described is that it’s the loss of normal. That is part of grief, for sure, and contributed so much to the disorientation that I felt after he died. For almost 18 months, my life had revolved around him, taking care of him, making his food, learning about his conditions, juggling veterinary appointments and tests and medications and supplements, taking him for car rides when his anemia was too severe for walks, getting up in the middle of the night to let him out when the steroids made him pee every two hours, flea combing since I didn’t want to use those meds anymore, … After he died, none of that was necessary.

For months after he died, I would be out and suddenly feel panicked, I needed to get home, right now, to take care of Ashki. And then I would remember – no, I didn’t. I didn’t need to get home.

On the 25th, I and some friends went to his favorite place, the beach at which he spent so much time playing and swimming before he got sick, where I took this picture of him: 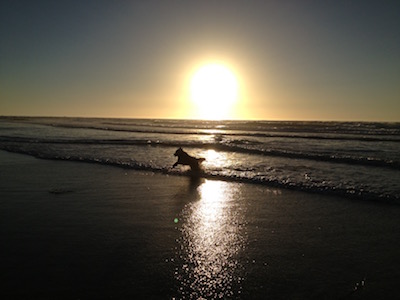 For the sunset, we went to the outcropping of rocks to which Ashki always wanted to go, to see the harbor seals.

The people who came were people he loved, and who loved him. I didn’t have anything planned. We talked about him, but we also just hung out and chatted, as it was a first meeting for some, and a reunion for others; but it was Ashki and our love for him that was the common thread. It was an incredibly beautiful day, an Ashki-beautiful day, as my godson called it.

The sunset was an Ashki-beautiful sunset.

As we stood and watched day turn towards night, change from sunset to dusk, the western sky shifted to all the colors of the rainbow, red, orange, yellow, green, blue, indigo, violet. It was magical.

I wish you could have been there with us.

This guy.  My heart. 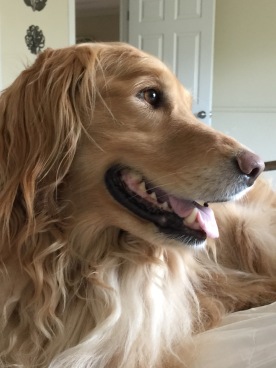 He’s called Ashki, which means “little boy,” in Navajo. Sometime I’ll tell you the story of how he got his name.

One year ago today, he relapsed for the second and last time. He had IMHA – immune mediated hemolytic anemia. At least we think that’s what he had. His case was unusual.

They say the first year of grieving is the most difficult. Getting through all the holidays and birthdays, the first ones, without your loved one.

I’ve been anticipating today, knowing it was coming. Knowing that today leads to the first anniversary of his death, in a little over a month.

The other day, I kept thinking of him. I kept thinking, I need to check on Ashki. I kept feeling like I would look over and see him, see his goofy face, waiting by the door. It didn’t hurt like it usually does though. It was just strange.

I miss him so very much.