As you know, if you read my last post, last week was the anniversary of Ashki’s death. I spent time throughout the week looking at pictures of him, watching videos, thinking about him, thinking about that week. It wasn’t just the date, it was the week —  he had his last transfusion Thursday, and died Friday.

One of the ways I’ve heard grief described is that it’s the loss of normal. That is part of grief, for sure, and contributed so much to the disorientation that I felt after he died. For almost 18 months, my life had revolved around him, taking care of him, making his food, learning about his conditions, juggling veterinary appointments and tests and medications and supplements, taking him for car rides when his anemia was too severe for walks, getting up in the middle of the night to let him out when the steroids made him pee every two hours, flea combing since I didn’t want to use those meds anymore, … After he died, none of that was necessary.

For months after he died, I would be out and suddenly feel panicked, I needed to get home, right now, to take care of Ashki. And then I would remember – no, I didn’t. I didn’t need to get home.

On the 25th, I and some friends went to his favorite place, the beach at which he spent so much time playing and swimming before he got sick, where I took this picture of him:

For the sunset, we went to the outcropping of rocks to which Ashki always wanted to go, to see the harbor seals.

The people who came were people he loved, and who loved him. I didn’t have anything planned. We talked about him, but we also just hung out and chatted, as it was a first meeting for some, and a reunion for others; but it was Ashki and our love for him that was the common thread. It was an incredibly beautiful day, an Ashki-beautiful day, as my godson called it.

The sunset was an Ashki-beautiful sunset. 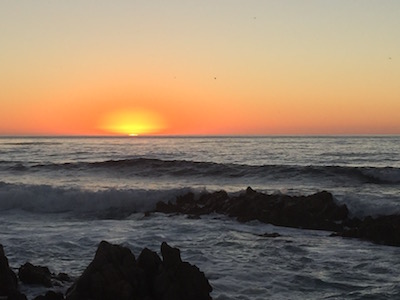 As we stood and watched day turn towards night, change from sunset to dusk, the western sky shifted to all the colors of the rainbow, red, orange, yellow, green, blue, indigo, violet. It was magical.

I wish you could have been there with us.

7 thoughts on “Anniversaries and grief”